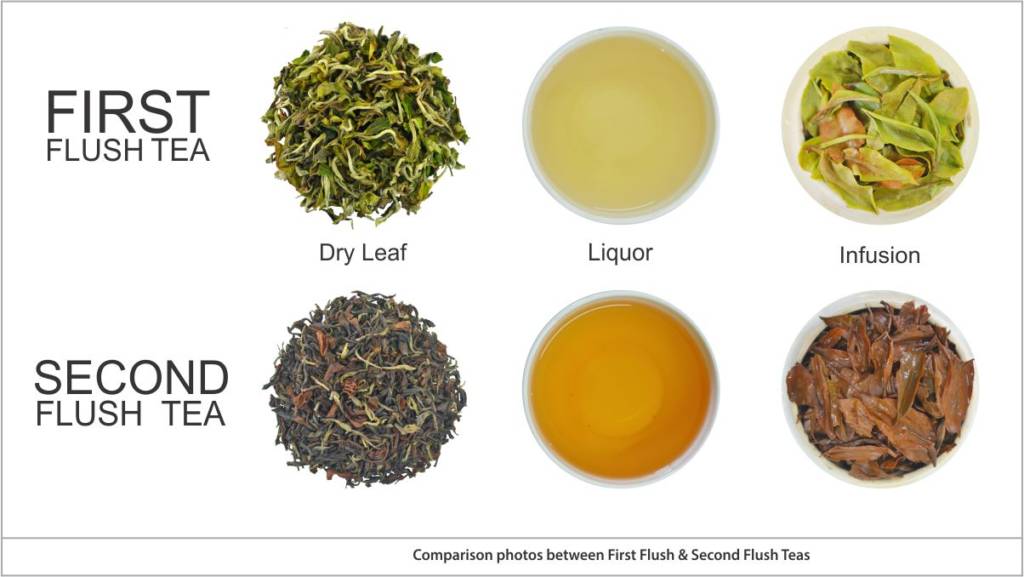 The change in seasons brings about a change in the characteristic of tea. As you all know tea plant responds to the environment in which it is growing and changes the taste of tea. The freshness & vigor associated with First Flush Darjeeling Teas is a result of the plant lying dormant during the winter season.

The growth during the first flush in Darjeeling is quite intense and after the burst of crop the bushes go into a spell called “banji”. A month or so of dormancy follows from mid April to May depending on the elevation. During the peak banji period the pluckers mostly pluck leaves without a bud or with a very small bud. During this time the weather in Darjeeling is slightly warm with sudden, sporadic & intense showers. Once the bushes have rested enough and the the moisture present in the air and soil build up the bushes are then ready for what we call the second flush. The tea bushes again sprout new shoots & leaves with a prominent bud but this time the character is different.

The fact that second flush Darjeeling teas are unique in taste due to the “Muscatel” character is known to all. However why this special flavor is present is second flush teas is not something that is common knowledge.
The second flush teas are usually harvested during the month of mid June again depending on the elevation. Around this time of the year in Darjeeling, the temperature is steadily rising which causes a rise in the insect population. Among these insects there is one called Jassids ( Empoasca flavescens) which is of important t 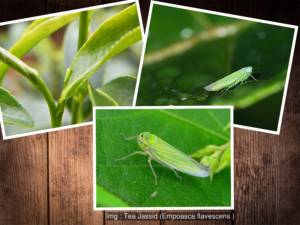 o us.
Jassids belong to the Cicadellae family which are also called leaf hoppers. These Jassids inhabit every habitat with vascular plants.

These minute creatures are known to suck plant sap from tender leaves.

Tea it seems is not totally immune to attacks from Jassids. The presence of Jassids in tea plant is inevitable, however nature does not simply leave things unfinished.

The Tea Jassids which are also called green flies in Darjeeling feed on the tea leaves for a couple of weeks. The tea Jassids are very minute in size , just one – tenth inch long & they look more like mini – grasshoppers. During the time they feed on the leaves, they suck out the moisture which causes the leaves to shrivel downwards. This phenomenon is the local Nepali language is called “ Kakreko Patti”. Kakreko means curled & patti is the local word for leaf. Now the loss of moisture does not kill the leaf but rather stunts it’s growth leading to a concentration of flavors. Also when the Jassids feed they leave pinpricks on the leaf surface, which induces natural fermentation. As it happens during the process of fermentation in tea, odorous compounds are released which in turn make the tea more flavorful & aromatic. It is a quirk of nature that the “Muscatel” flavor present in second flush Darjeeling teas is a result of stress responded reaction of tea leaves to insect infestation.

Gopaldhara being one of the highest elevated tea gardens makes some of the best second flush muscatel teas.

Indulge in the finest Darjeeling Muscatel teas at our online store @ www.gopaldhara.com

About our Gardens :
Gopaldhara Tea Estate : Gopaldhara is one of the highest plantations in Darjeeling region. It stretches from 3500 ft to 7000 ft. Established in 1881 and has been making exquisite teas for its worldwide clientele. All our Teas are freshly packed at Gardens so that you get the best flavors and aroma.

Rohini Tea Estate : Rohini Tea Estate is located in the Kurseong valley of Darjeeling. Rohini is the youngest tea estate in Darjeeling. These teas that are made from harvested leaves in Rohini are of the Chinese origin and in the second flush produce exquisite muscatel teas.

One thought on “Nature’s Own Flavour Factory : Darjeeling Muscatel Teas”